My previous post detailed several errors and outright falsities in Ross McKitrick's discussion and halfhearted rebuttal to Karl et al. (2015), which corrected biases in sea surface temperature measurements to ultimately conclude that the global warming "hiatus" since 1998 probably does not exist (see previous post for links to papers, so on).  In that post I promised further discussion on one topic that I didn't get around to, since McKitrick was not the particular author at WUWT that made this mistake, so I will do so here.  I'll also include a bit about a recent piece by the comically wrong Mr. Monckton, who also tries to refute the paper.

The bit that I promised to discuss was the direction of the correction applied in Karl et al. (2015) to fix the difference between the buoy and ship measurements.  When compared against each other, buoys on average measure the same locations roughly 0.12˚C lower than ships do.  This on its own does not really tell us which method is the one making the right measurements (in fact it doesn't even tell us that either is correct in the first place, instead of just close), so one may naively ask whether the ship data should be adjusted downward or the buoy data adjusted upward.  Or, maybe some combination should just be used.

McKitrick breathes a whisper of this complaint when he comments that "the bias is usually attributed to ships rather than buoys", though he does not entertain it explicitly and so I'll just assume it wasn't meant to be seriously suggested anyway.  But that doesn't mean that one group did not try to make this argument anyway—Pat Michaels, Richard Lindzen, and Paul Knappenberger were very clear what they thought the effect of such an upward correction would be (emphasis theirs):

Adjusting good data upward to match bad data seems questionable, and the fact that the buoy network becomes increasingly dense in the last two decades mans that this adjustment must put a warming trend in the data.

They're right that this adjustment must put a warming trend in the data, because it is a known cooling bias that, due to it being a bias, shouldn't be kept in.  You would think, however, that one of the three would have bothered to make some basic checks to see how this would have worked if the correction was made the other way around.

Let's assume a numerical example just like McKitrick did in his post, except we'll keep it a bit simpler: I'll create a pseudo-temperature dataset (simulated AR(1) = 0.75 noise with drift equal to the centennial trend of +0.065˚C/dec), and then have my "ships" measure 0.12˚C below (edit: above) the actual value, with some noise; and then have my buoys measure at the exact values, with less noise (to reflect what we know about the relative precision of the instruments, as from Kennedy et al. (2011)).  I'll also have the proportion of buoys increase linearly from 0% to 80% from 1980 to 2010, with before-1980 proportions at zero and after-2010 proportions at 80%.  I won't weigh the buoys more than their proportion though as Kennedy et al. or Karl et al. did, to help illustrate the point.

The graph immediately below shows the simulated temperature anomaly series in black, along with the estimate calculated from the simulated ship and buoys measurements in red, with the given coverage weights.  The baseline chosen was 1960-1989. 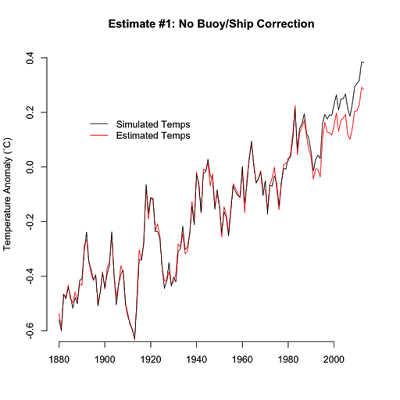 Clearly, without a further correction for the bias between the two datasets, the cooling bias in the estimate will persist.  So, do we add to the buoys, or do we subtract from the ship?  If we add the buoys, that's simple enough, since the buoys are the new data source throwing a wrench into things.  However, if we subtract the ship data, we have to do so for the entire series.  After all, if the ships overestimate present-day temperatures now, they should have done so in the past.  The inclusion of buoys did not make them inaccurate, the ships don't know any better (or worse)!

So we have competing naive interests: on the one hand, we know the buoy data is more accurate, or at least think it is.  On the other hand, we may not be justified in assuming that the bias calculated from the narrow time window we have is valid for an entire century's worth of correction: can we correct ship data with no buoy data to compare to?  Probably not.  So, which do we use? 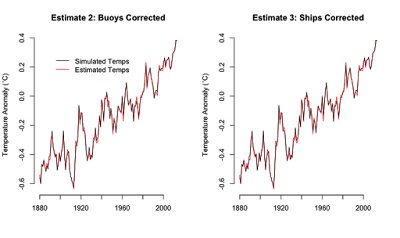 If you try to find a difference between the two datasets, you will fail.  They are exactly the same—some basic arithmetic will verify this, and I implore Michaels and co. to double check this so they can see for themselves.

But why do they show the exact same thing?  Because the only thing that we ever care about is the global temperature anomaly.  The absolute temperatures do differ between the different corrections, as shown below.  The estimates are offsets of each other, which means the anomaly calculations are the exact same. 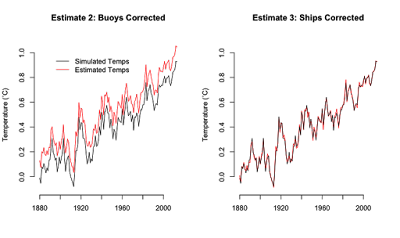 This shall be brief, as reading Christopher Monckton's writing is very tedious since it is so utterly, utterly vapid and yet so utterly, utterly arrogant.  And there's really only one claim of "substance" in his absurd contribution to WUWT, and it's so wrong it actually borders on funny.

Going past his self-congratulatory spiel about how he (I'll stroke his ego here) allegedly outsmarted Tom Karl at some hearing of sort, and some blathering about the Argo array, Monckton gets to the punchline of his article by asserting that Karl et al. breaks the laws of thermodynamics because the rates of temperature increase of some other sinks are not as high as the surface temperatures are.  Monckton proudly claims that this must violate the second law of thermodynamics, because cold things cannot warm hot things!

The brevity is this: the trend in heat content of one object clearly cannot be expected to match the trend in heat content of another, especially if you're alleging that the heat is coming from one and going into the other.  Why?  Because in a closed two-body system, a loss of energy from one body means a gain in energy in the other.  Duh.  Conductive heat transport is driven by absolute temperature differences, and temperature trends over time can take a variety of patterns in open systems as the Earth's climate is.  And that doesn't even get into convective/bulk transport, which has virtually nothing to do with temperature differences across a boundary, and which is responsible for a very large amount of heat transport between the atmosphere and oceans.

If Mr. Monckton wants to be taken seriously, he should instead be asking this question: if the CERES-measured energy imbalance means that the Earth is accumulating energy, but he claims that there is no way for this energy to have actually been stored anywhere (either by pointing out a seeming lack of trend in some datasets or by giving really really bad arguments about trends for other datasets), where does he think that the energy goes to?  Does it just get magicked away?  Or perhaps he thinks that even CERES is lying?

For my health, I won't hold my breath for an answer.
Posted by Unknown at 11:20 PM 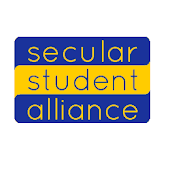 The only community at the University of Michigan specifically for nonbelievers and their allies! 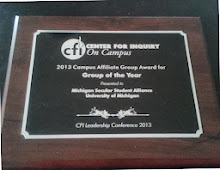 Center for Inquiry on Campus 2013 Group of the Year 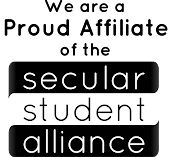